Pipeline Explosions in the U.S. Over the Past Decade

The United States relies on an extensive network of pipelines that carry natural gases to all customers. Without this pipeline infrastructure, our economy would not be able to function. Every year, more than two million miles of main lines and pipelines deliver natural gases to over 70 million customers.

While this transportation network is mostly reliable and safe, recent pipeline explosions have called attention to its vulnerabilities. At the Doan Law Firm, we have witnessed the devastating impact of pipeline explosions on the public over time and recognize that many of the incidents could have been prevented through more effective safety measures by the companies.

Using the most recent data from the Pipeline and Hazardous Materials Safety Administration (PHMSA), we worked with the data visualization agency 1Point21 Interactive to analyze all pipeline explosions that occurred in the U.S. over the last decade. We included four types of pipelines: natural gas transmission and gathering, natural gas distribution, hazardous liquid and carbon dioxide, and liquified natural gas.

Between January 2010 and October 2021, there were 368 documented pipeline explosions, resulting in 89 deaths and 440 injuries.

Here are some of the biggest takeaways:

Number of Pipeline Explosions Per Year 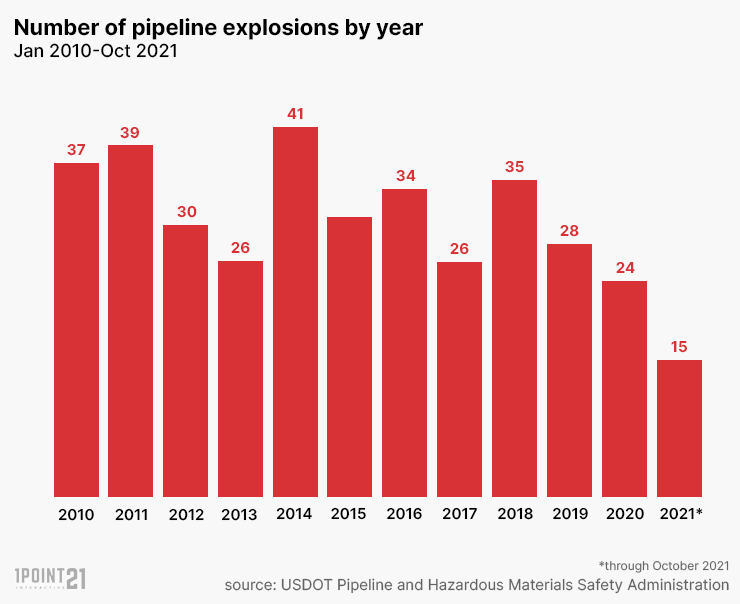 The East Harlem gas explosion was likely caused by a faulty connection between two Consolidated Edison Inc pipes, along with a hole in a nearby sewer line that New York City had been aware of for over eight years. The public and energy company’s delay in reporting the gas odor and notifying the fire department also made matters worse.

Both Con Edison and New York City’s infrastructure were found responsible for the pipeline explosion. In 2017, Con Edison settled to pay New York State $153.3 million over the deadly explosion – the state’s largest gas safety-related settlement. The settlement includes a $25.1 million fund that would cover the costs to fix gas pipes, improve responses to leaks, improve education, and compensate residents and businesses who were injured by the explosion. 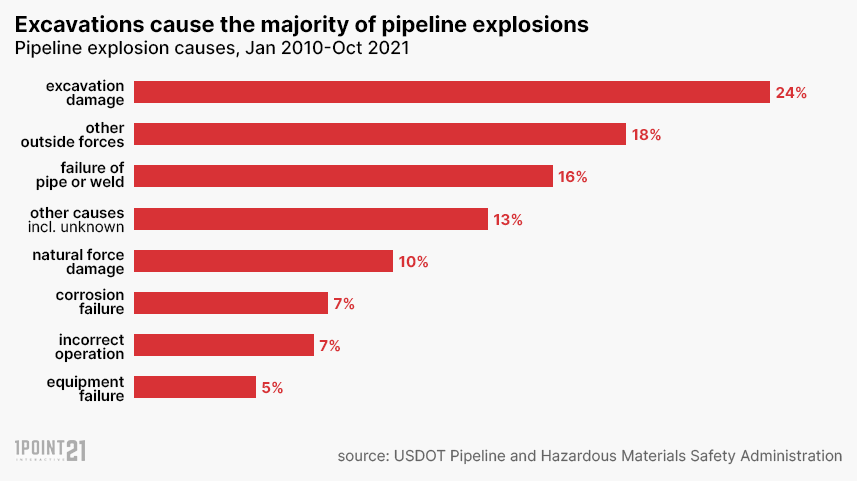 The majority of pipeline explosions (77 percent) come from distribution lines, which are the smaller, lower-pressure lines owned by local utilities.

Which Operators Have Experienced the Most Pipeline Explosions?

The three companies, Pacific Gas and Electric (PG&E), Consumers Energy, and Southern California Gas (SoCalGas), have experienced the most pipeline explosions in the past decade (12), but PG&E had the worst record with 83 casualties. Unsurprisingly, many of the companies on this list are some of the biggest natural gas operators in the country. In fact, SoCalGas and PG&E not only rank for the highest number of explosions but also as the top two public utilities by the number of customers. 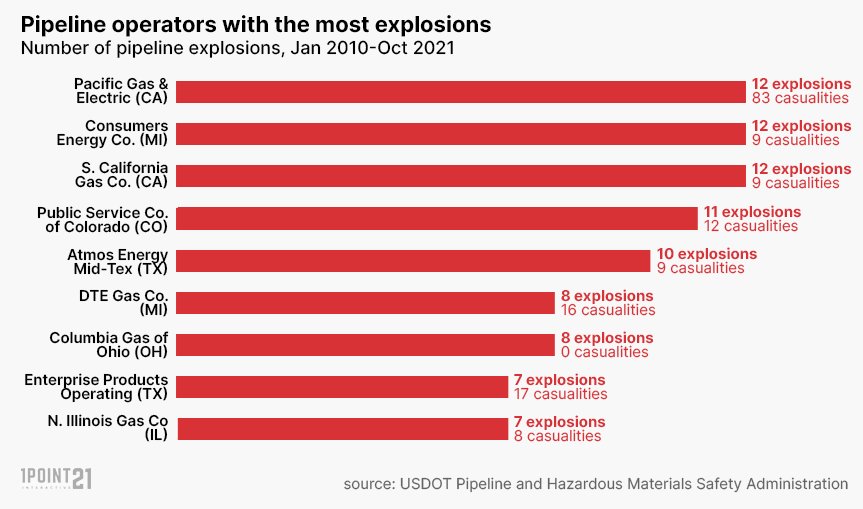 In some cases, the explosions were linked to a systematic violation of rules governing pipeline safety. Following the 2010 San Bruno explosion, which killed eight people and injured 58 people, an investigation found that PG&E falsified gas pipeline safety records from 2012 to 2017.

Who Is Most Likely to Be Injured by a Pipeline Explosion? 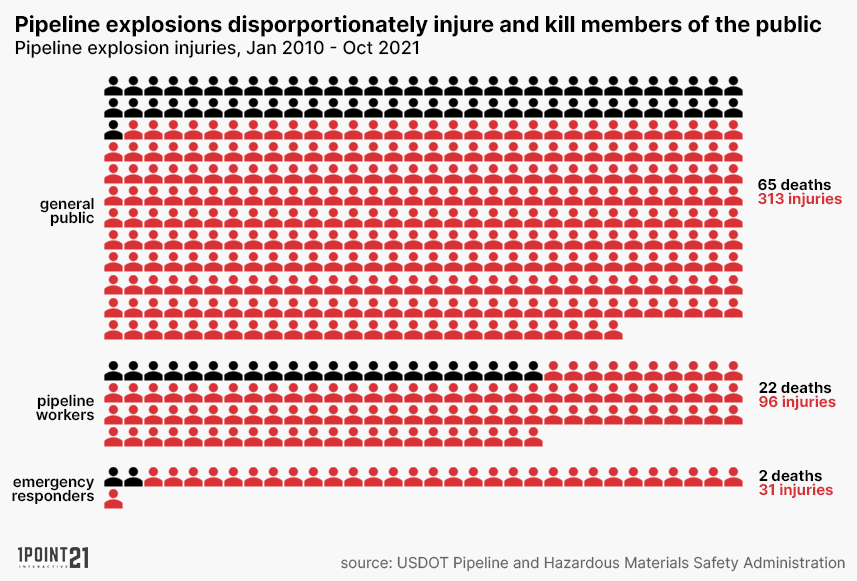 Between January 2010 to October 2021, 65 members of the general public (73 percent of all fatalities) were killed in a pipeline explosion, compared to 22 pipeline workers (25 percent) and two emergency responders (2 percent).

Where Do Pipeline Explosions Occur the Most?

Most Pipeline Explosions by County

In the last decade, Wayne, Michigan saw more pipeline explosions (9) and casualties (20) than any other county, followed by Cook, Illinois, and Los Angeles, California. 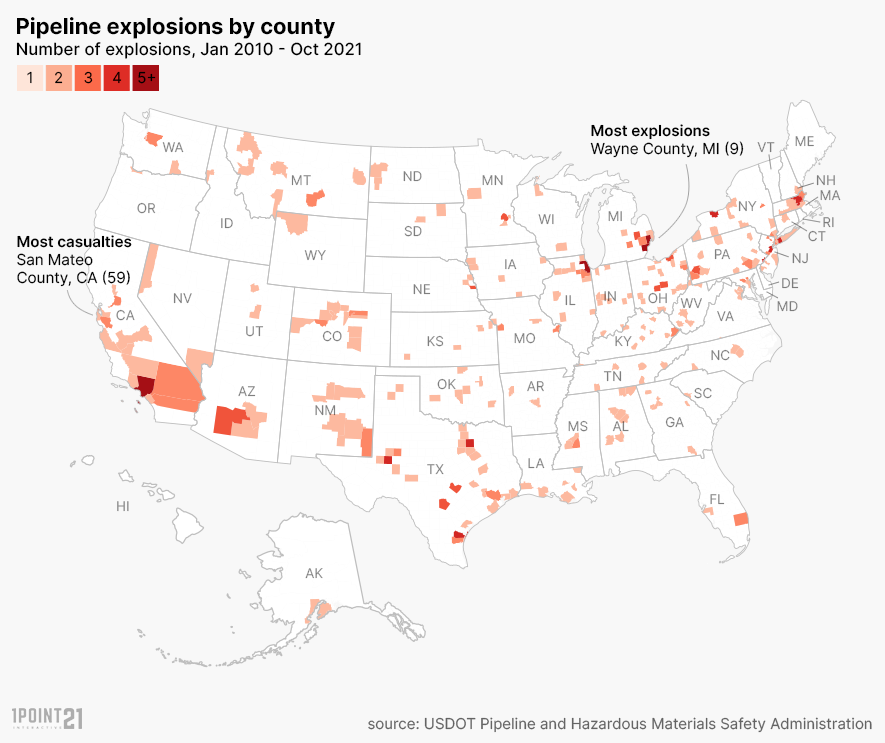 Michigan has seen an increase in hazardous leaks in recent years due to the dangerous state of pipelines. While Michigan’s largest public utilities DTE Company and Consumer Energy have implemented programs to speed up the process of replacing aging pipelines, many people continue to face dangerous conditions right outside their homes and wait up to 25 years for a repair.

Most Casualties by County

San Mateo had only one explosion but the most number of casualties of all the counties. In 2010, a pipeline exploded in San Bruno, California, killing eight people, injuring 51 people, and destroying 38 homes in the area. The explosion was so large in size that at first, it was believed to be the result of a plane crash.

Worst Three Pipeline Explosions (by the Number of Casualties)

Fatalities: 8 (all to general public)

Injuries: 51 (all to general public)

Summary: In 2010, a PG&E ruptured pipeline caused an explosion that killed eight people and injured 51 more in a San Bruno neighborhood. The explosion put the company and their aging pipelines under much scrutiny.

Fatalities: 8 (all to general public)

Injuries: 48 (all to general public)

Fatalities: 1 (all to general public)

Injuries: 25 (all to general public)

Summary: In 2018, the pressure in the gas pipelines was 12 times too high, resulting in a series of explosions and structure fires across Merrimack Valley. The event killed one teenager, injured 25 people, and impacted thousands of Columbia Gas customers. Columbia Gas paid $143 million to settle class action lawsuits brought on by explosion victims.

Fatalities: 1 (all to general public)

Injuries: 25 (all to general public)

Summary: After an overpressure gas line caused 80 fires, thousands of people were evacuated from their homes in Merrimack Valley. The explosion killed one person, injured 25 people, and destroyed or damaged over 100 buildings.

Summary: An explosion and fire at Transco damaged some of the facility and station piping. An investigation by the PHMSA determined the root cause to be internal corrosion

Summary: An explosion at the Plymouth LNG plant in eastern Washington injured five workers, forced hundreds to evacuate their homes, and resulted in significant property damage. This was one in several accidents that occurred at The Williams Companies’ natural gas facilities over three years. An investigation found that the company repeatedly failed to follow safety regulations and protect its employees not only at this facility, but throughout U.S.

While not all pipeline explosions can be prevented, many can be by improving company safety practices, maintaining pipeline integrity and better preparing the public for the incident. Companies should regularly inspect the pipelines for damage, monitor pressure in the lines, and train their employees on how to properly install pipelines.

As a member of the public, if you detect a leak or feel that something isn’t right, leave the area immediately and call 911 to report the leak.

According to the PMHSA, signs of a pipeline leak may include:

Our study is based on pipeline explosion data from the PHMSA over a decade. Our data includes four types of pipelines:

If you would like to report or republish our findings, please link to this page to provide a citation for our work.